This grand Society Hill mansion in the Georgian Style would have been one of the showplaces of Colonial Philadelphia. The ground floor exterior and interiors were lost in the 1800’s but many other exterior details are original.

Not Open to the Public 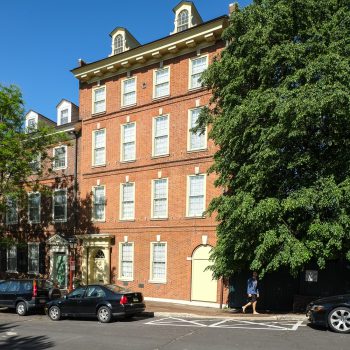 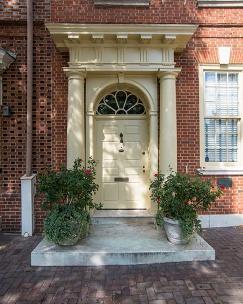 One of the main avenues to wealth in Colonial Philadelphia was being a merchant, especially a ship owner. Trade with the mother country and particularly the Caribbean was controlled and profitable and if you were really lucky, war would break out and you could become a legalized pirate (commonly known as a privateer).

There were risks of course – ships were lost at sea and this could be particularly catastrophic if you happened to be on board at the time, which James Abercrombie was just one year after he finished his beautiful house.

The home is a grand expression of urban Georgian design with many surviving exterior details such as the belt courses at each floor, flat arch lintels with contrasting keystones and large modillions under the cornice. There is also a fine frontispiece which is not original, but the original would have been as grand. It reminds you of the similarly over the top Mount Pleasant also build by a sea captain.

For a Georgian building, the windows are very large which would fill the interiors with daylight. At the time it was built, it was one of the largest and tallest residences in the city. The original view would have been a good one – the river was closer in the Colonial era and Abercrombie probably could have seen his ships from the upper windows.

The house passed to a business associate of Robert Morris, Blair McClenahan who helped found the First City Troop but unfortunately also followed Morris into bankruptcy. By the 19th century the house had lost much of its interior and become a warehouse By the 20th it had become a paper bag factory. It was restored in the 1950’s.