Though their interiors have been changed over the years these facades represent a high water mark of Victorian masonry design and construction.

Some Open for Events 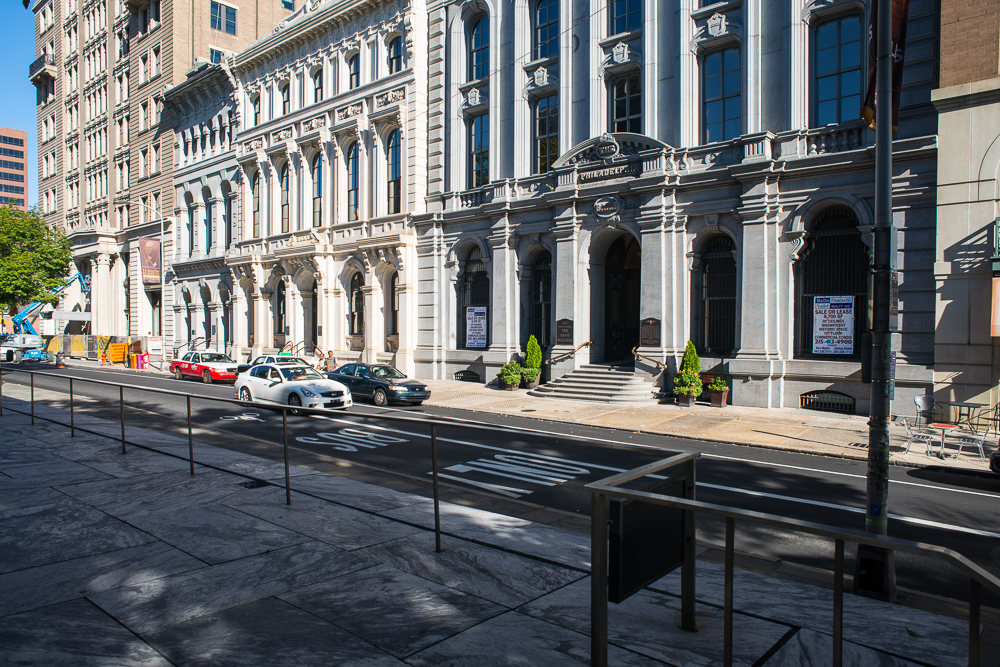 The 300 and 400 blocks of Chestnut Street were known in the 19th century as bank row but many banks were demolished in the 1950’s. In the 400 block, only three remain at 421, 427 and 431, but they give a beautiful view of a graceful period of commercial architecture. The earliest two, by John Gries, are in the Italian renaissance revival style. This style here was actually based on Venetian models with facades made up of repeated bays of semi-circular arches. The large bays create an open inviting style ideally suited to commercial architecture. All three buildings are actually constructed of brick, sometimes with cast iron interior columns allowing them to advertise their buildings as completely fireproof. The facades on Chestnut Street were covered with more ornate materials, usually granite or marble.

The oldest of these,from 1855, the Farmers and Mechanics Bank at 427, has a marble front with retail space originally on either side of the entrance to the main banking hall. The building’s central bay projects out onto Chestnut Street giving the facade a more three dimensional quality – also notice the projecting cornices above the first floor windows and entrance door, and the carved spandrel panels under the second floor windows.

The Bank of Pennsylvania of 1859 at 421 Chestnut Street also had the actual banking hall located further back in the building which was connected to the front door by a corridor. This hall was very ornate and originally included a cast iron dome, which has since been demolished. The façade here is of Quincy granite making the building somewhat more somber but it has nicely carved details at the first story and within the arched windows at the second floor.

The newest building, at 431 Chestnut Street for the Pennsylvania Company, is by the well-known Victorian architect Addison Hutton built in 1876. Only 15 years later than the other two buildings, it shows the growing influence of the Arts and Crafts movement and Eastlake design as seen in such details as the incised carving on the front granite pilaster.