This fine example of a Greek revival row came at the end of the first wave of speculative row houses built at the turn of the century. Noteworthy wrought iron. 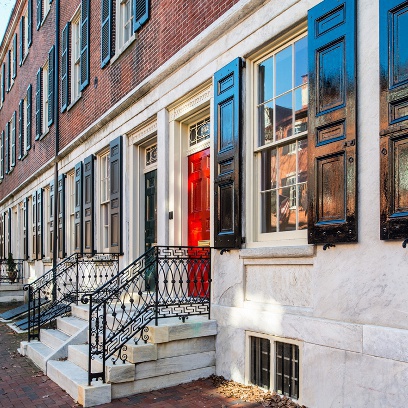 Speculative housing had always been a part of the colonial economy. Often a builder would build one or two houses at a time sometimes keeping one for himself.

Things changed after the Revolution and the greater prosperity of merchants and other wealthy people prompted speculators to begin to build whole rows of houses which they would sell to individuals or retain and rent out. Often aimed at the growing middle and upper middle class of craftsmen and merchants, houses were designed in the latest style and  were sometimes designed by leading architects of the day. 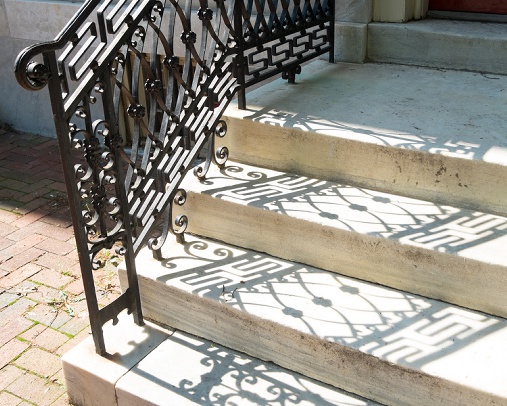 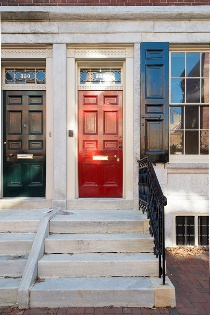 Built at the end of the first wave of row development, this row certainly has pedigree. Funded by Stephan Girard and built in the emerging Greek revival style, it is beautifully detailed. In keeping with Greek Revival austerity, the upper stories are rather plain with a thin marble molding setting off a tiny curved brick cornice. The large six over six double hung windows (slightly smaller on the top story) have no decorative lintels and small marble sills.

Most of the exterior architectural effort is spent on the marble-clad ground floor. A slightly projecting marble base supports a marble first floor with recessed panels under each window. Running above the windows is a projecting marble molding which, along with the top molding at the cornice, accentuates the horizontality of the row of houses. The doorways are restrained (no columns like Portico Row) but beautifully paneled and feature delicate tracing in the transom windows above. Don’t miss the beautiful running Greek key wrought iron work. The marble cladding and the details create an overall impression of elegant restraint. Many original interior details survive in some units. 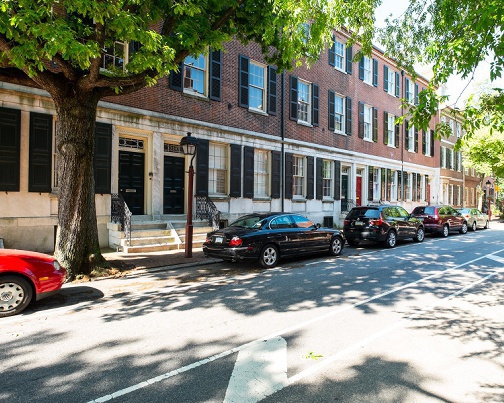