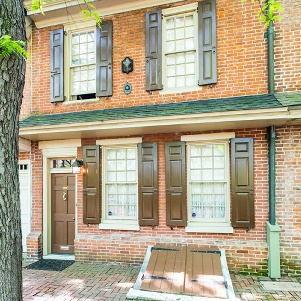 Even though there were many large homes going up in the late 1700’s, Society Hill was not exclusively a wealthy enclave. Smaller working families’ homes were still being built like this pair of homes completed in 1771. Small (only two stories) and without much decoration, they are clearly not meant to impress the neighbors – a plain transom in place of a fanlight, a pent eave instead of a belt course and simple marble lintels instead of flat arches and keystones. Even so, the pleasing proportions and simple symmetry is a reminder that modest Georgian homes could still be very attractive if done well.