First Bank of the United States

Having just removed a King, our new country went to great lengths to build a bank elaborate enough to create an image of solidity and stability for new investors. Its formality clearly links to Roman republican ideals and values that our country felt a kinship to. 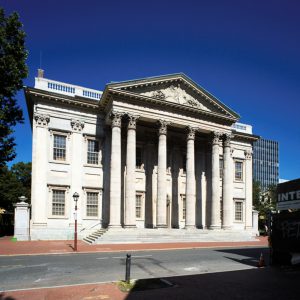 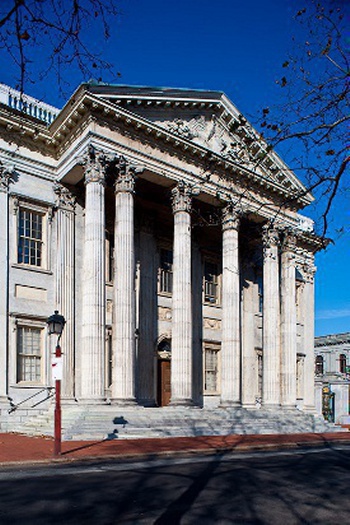 At the end of the Revolution, our new country found itself independent but in heavy debt. Fortunately it had a secret weapon in the form of Alexander Hamilton. The founding fathers were a talented lot, but among them were three bona fide geniuses – Benjamin Franklin, Thomas Jefferson, and Alexander Hamilton. Hamilton’s genius lay with his brilliant mind and incredible organizational skills. Washington had seen Hamilton’s abilities during the American Revolution when he was Washington’s personal secretary. When he became President, Washington turned over the treasury to Hamilton and Hamilton executed a miracle.

The colonies had not had a banking system or much of a financial infrastructure – all that was taken care of by the mother country. 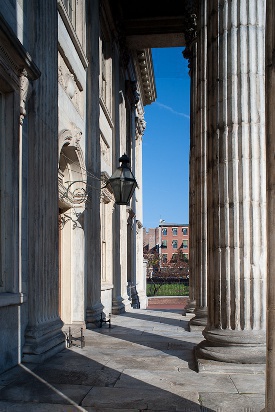 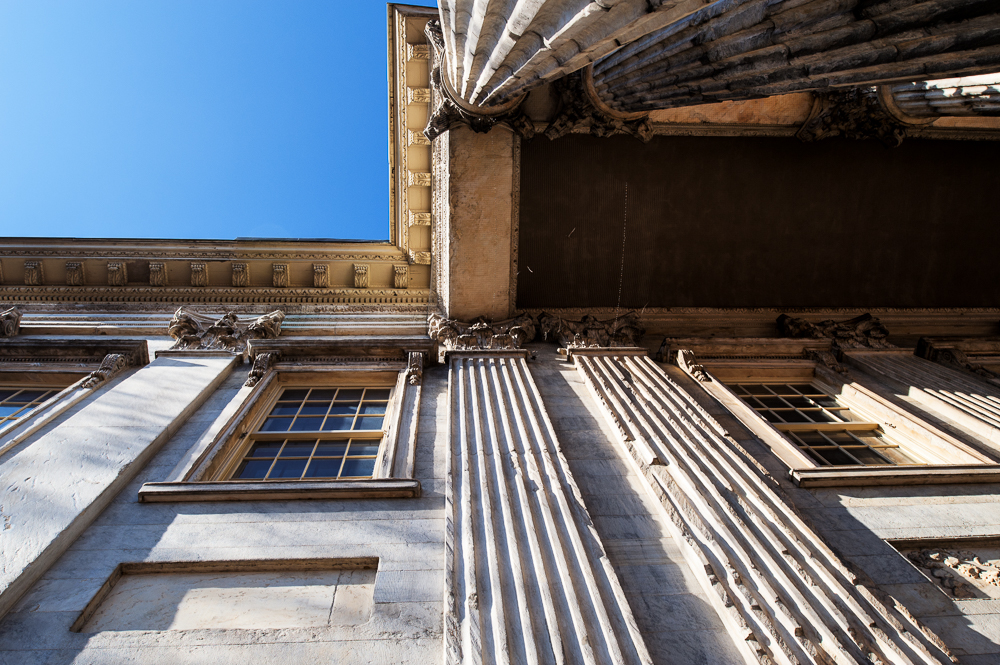 Hamilton, upon assuming the post of secretary of Treasury, was instrumental in creating the First Bank of the United States. The bank was, by design, a private corporation which chose to gain public trust by building an imposing building in the latest Federal style of architecture. Expressing all of the young optimism of the new country, its front, of Pennsylvania blue marble, is full of classical Roman details which combine to make a strong political statement.

Look above the windows to see the bundled reeds, the fasces, once the symbol of Roman imperial power. The projecting portico is held up by six Corinthian columns, the favorite architectural order of the Romans. More impressive still is the eagle in the tympanum. Actually carved of wood, (stone carvers were a pretty rare commodity in Philadelphia of 1790), it holds arrows and a shield defiantly in one set of talons and turns its head angrily toward the front of the building. If there’s any doubt that America was beginning to regard itself as the inheritor of Roman values, and perhaps Roman attitudes toward the rest of the world, this carving seems to settle the argument.

The building was designed by Samuel Blodgett, who was a merchant, author and amateur architect. He may have been inspired by the Royal Exchange in Dublin completed just 38 years earlier. The bank’s overall form is very Federal based on both English architecture of the same era and contemporary archaeological discoveries in Italy.

When you walk around the building you discover that the front of the building is a bit of a stage set. The sides and back are plain brick punctuated by beautiful Federal era double hung windows.

Plain, and a little severe, the sides and rear of the building don’t inspire much, but what a front façade. The colonials had just thrown off the yoke of the mother country. By building this impressive building perhaps they hoped to attract investment and let everybody know that investments would be safe with this new political enterprise. 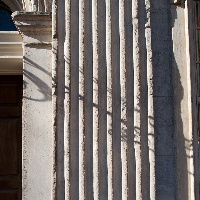