All of the founding fathers who spent time in Philadelphia came to this Georgian gem to be entertained at dinners and parties. Not to be missed. 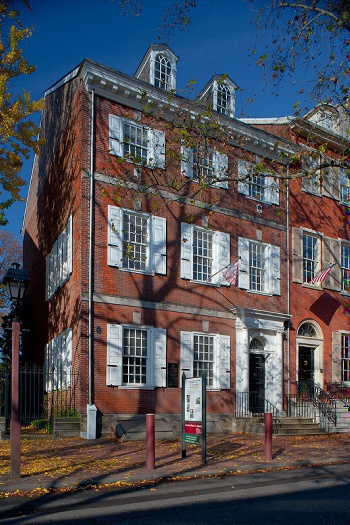 The Powel House, Independence Hall, Carpenter’s Hall, and Christ Church form a uniquely important group of urban Georgian buildings. These buildings, built in a 45 year period between 1727 and 1773 represent the high water mark of Georgian design in the mid-Atlantic, if not the colonies as a whole. They clearly show why Philadelphia craftsmen traveled throughout the colonies to wherever quality workmanship was demanded. The Powel house is the leading surviving example of the Georgian row house in America, a common building type in England and Ireland during this period.

The row house design supports floors and interior partitions off of the sidewalls which allows the front and rear walls to be opened with windows and doors. In the case of the Powel House, when first constructed, and at the present time, the south sidewall has no adjacent structure which allows windows, but there have been periods of time in the house’s history where this wall was shared. 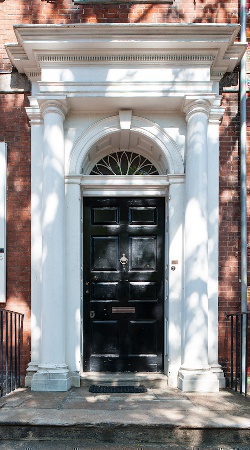 Samuel Powell was born into a wealthy Quaker family and traveled throughout Europe as a young man. During his travels, he converted to Anglicanism and upon his return to Philadelphia became an important member of an increasingly Anglican society. He married into the wealthy Willing family and purchased the house that had been started by Charles Steadman but not completed. Powel was mayor during the revolution and maintained good relations with the Revolutionary leaders (and the British when they occupied the city.) He and his wife Elizabeth hosted parties attended by all the founding fathers. Their lavishness particularly impressed that perennial puritan John Adams.

Powel’s journey from Quakerism to Anglicanism has been seen as echoing the house’s plain “Quaker” exterior contrasting with the rococo interior more befitting an Anglican gentleman, but this explanation is probably too glib.

Many other row homes in Philadelphia owned by practicing Quakers are similarly restrained on the outside and extravagant on the inside. It was the fashion without necessarily being rooted in religious differences.

The exterior of the Powel House is a beautiful example of Georgian architecture. Most of the classical features abound, like stone lintels cut to look like flat arches, Flemish bond brickwork with glazed headers and the white stone belt course at the first and second levels.

Particularly noteworthy is a beautiful frontispiece (doorway) with a semicircular fan light above the door and flanked by partially engaged Doric columns. Fan lights are not generally a feature of Georgian architecture but are more common in urban settings where front wall space is at a premium and traditional Georgian sidelights are difficult to install. The fan light allows light into the entrance hall but doesn’t take up too much space on the outside of the building

The large wing of the Powel House facing Third Street is unusual that it has four essentially public rooms, two on the ground floor and two on the second floor following the Italian/British tradition of the piano nobile. These rooms were lavishly finished with paneling, carved chimney pieces and rococo plaster ceiling work. The two upstairs rooms are considered to be such fine examples of Georgian design that when the house was threatened with demolition in the 1930’s these two rooms were dismantled and taken to the Philadelphia Museum of Art and the Metropolitan Museum of Art where they remain today. The rooms in the house itself are carefully done reproductions which are accurate to the last detail.