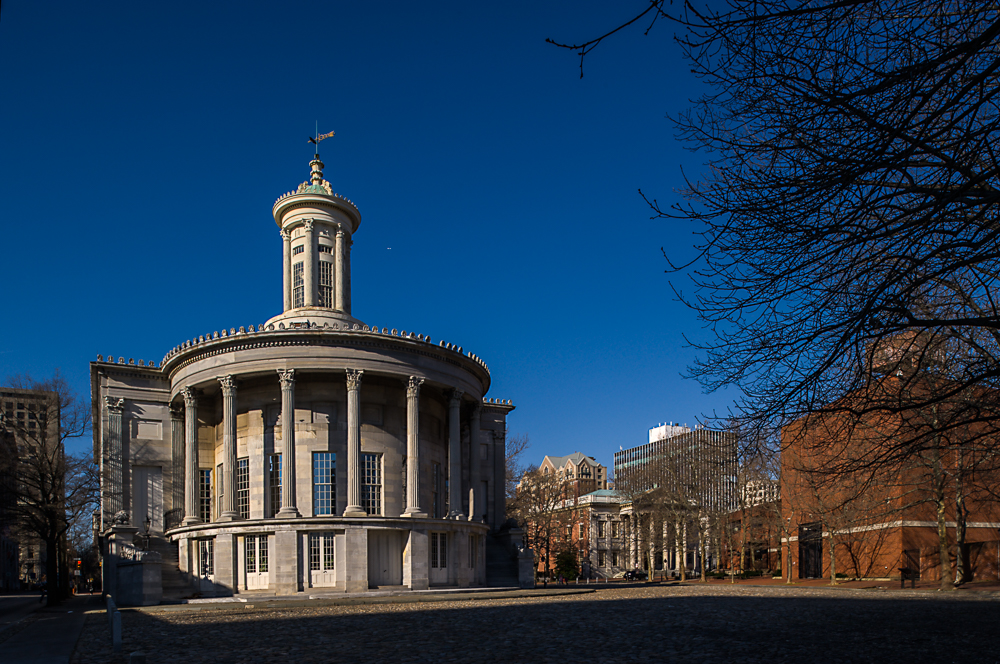 Having started his career by producing one of the first Greek inspired buildings for the new nation at the Second Bank, William Strickland created another masterpiece 16 years later, with the Merchant’s Exchange. Where the Second Bank is a severe Greek temple, conservative and staid; the Merchant’s Exchange is an exciting tour-de-force of classically inspired form. In particular, the semi-circular colonnade on the eastern façade of the building is one of the most beautifully executed elevations of the era.

There are aesthetic problems – the building presents a bit of a split personality. The face of the building, on Third Street, presents a beautiful grand temple portico at the second level of the structure. Unfortunately, visitors are forced to enter around two squat columns at street level which partially hide the main doors. More successfully elsewhere on the ground floor, Strickland designed separate shop fronts facing directly out onto the street so that merchants could keep their own hours and have direct access without having to go inside the building. 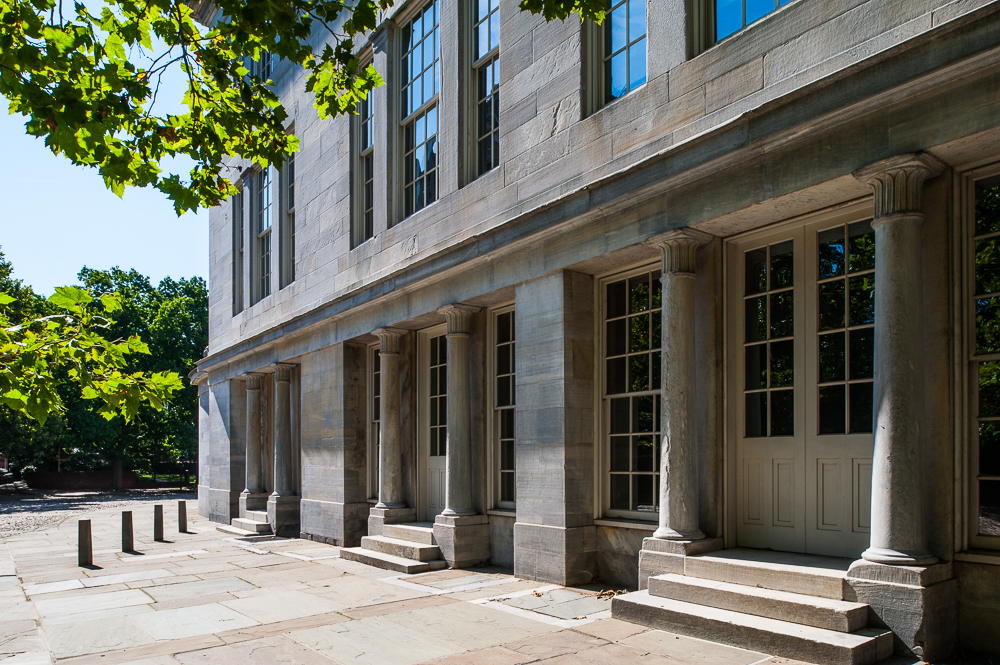 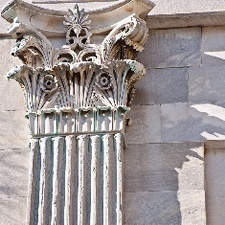 Each shop front door is half glazed and flanked by very tall double hung windows. The shop fronts are flanked by columns with Lotus leaf capitals. The upper floors have large double hung windows with sidelights, an arrangement Strickland had used earlier at the Second Bank and a precursor to the Chicago style window 50 years in the future.

Going back to the real magic of the building – on the east side, behind the giant Corinthian columns of the portico, Strickland encloses the trading room floor with a semicircular wall facing the port. The wall has enormous double hung windows over 10 feet tall which would have flooded the trading room with light. The original view out these windows would have included the docks in the port of Philadelphia. If the Corinthian columns marching around the semicircular trading hall at the second level seem familiar, they should. It is very reminiscent of that most famous Federal era house, The White House.

The trading room has a tile roof inspired by its Greek forbearers and topped by a cupola inspired by the Choragic Monument to Lysicrates, lifted directly out of Stewart and Revett’s Antiquities of Athens. Two curving staircases, guarded by two sleepy lions carved by Italian sculptors working in Philadelphia, lead up to trading floor level. As beautiful as these stairs are, as Roger Moss suggests, they could only have been secondary entrances given their exposure to the weather. Contemporary accounts indicate that the Third Street entrance was the one used most often. Regrettably the interiors have been mostly lost and the building is now used as offices for the National Park Service with some exhibition space.

Even so, it is apparent why this marble palace of commerce set a very high standard for commercial buildings in the new Republic